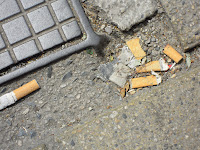 Second, policy and politics: as of today Austria has a new tobacco law. Restaurants must be smoke free - unless they are smaller than 50 square meters - and unless they have a separate room for smokers - and unless they are under some landmark protection and unless... The new law is full of exceptions (Austrians always make exceptions) and one of the most smoker friendly tobacco laws in the EU. Restaurant owners lobbied against all changes, claiming that prohibitive laws would put them out of business, and the coalition government was too weak to push sensible legislation, meaning an all out ban on smoking in all restaurants, cafés, bars...

In the USA things are different. According to the American Cancer Society 23 percent of men and 18 percent of women were smokers in 2008. There is no nationwide ban on smoking, but many states have strict legislation. In California lighting up is prohibited in enclosed work places and some cities have imposed additional rules such as no smoking in parks. (Austrians are nevertheless overall healthier than Americans.)

I generally prefer smoke free cafés and restaurants. However, I am Austrian and even though I will usually choose to sit in the smoke free room of a café I do make exceptions. Here's what happened this week when I visited my favorite Vienna coffee house, Café Prückel:

Prückel has two large sections. The area in the back is reserved for non-smokers; the front part has an ash tray on each table, the air is slightly hazy. Which section did I pick? The smokers'. Why? Because I like it better. The decor is more original; the chairs are more comfortable; the room is less crammed with furniture and therefore, paradoxically, seems more airy. Plus, it's a habit: this is the section where I always sat, as a smoker until 1993, as a non-smoker after that. And while I know about the dangers of second hand smoke - habits can be so hard to kick.

Lorraine Seal said…
My husband and I are former smokers; I quit nearly 20 years ago; he did so more recently. Used to California's strict anti-smoking laws and surprisingly strict, if more recent, anti-smoking laws in Ireland, we were surprised at the lax attitude here in Austria.

We find it refreshing. There is something relaxed about the live-and-let-live attitude it suggests. Nor have we been bothered my smoke in public places, at least so far.

So I can see why you'd prefer the smoking section of your favourite cafe. It's seems somehow, well, more authentic, I suppose.

The restrictions we keep running afoul of have to do with noise control. Exactly when is one permitted to mow the lawn, anyway?
July 13, 2010 at 1:35 AM

Christina Schweighofer said…
This comment has been removed by the author.
July 13, 2010 at 4:23 AM

It is only a matter of time until you can't smoke in any public place....I would have expected this already from all first world countries.

PS....We don't smoke anywhere in public indoor places in Canada....and I have yet to see one place negatively financially impacted. Smokers get board ...go out and smoke outside.

Anyhow excuse my rant.....have a bike tour booked in Austria and just read about the smoking laws lack of enforcement!
July 7, 2014 at 9:27 PM