Legacy of a Drought: Water Wise Gardens in L.A.

March 30, 2011
Finally. California's new governor, Jerry Brown, was expected to proclaim today that the drought which has officially plagued the Golden State since 2009 is over. This winter brought precipitation by the tub full: record breaking rain fall in December, plenty more rain in March, 50 feet of snow in parts of the High Sierra. Bottom line we got about 50 percent more precipitation than in an average year.

This is great news of course - though we in L.A. should never see ourselves as off the hook. Southern California is a desert. The water that we use here always comes from somewhere else, be it the Colorado River or the High Sierra, and if the drought had an up-side it was that many of us became aware of this.

Angelenos aren't - and probably never will be - saints when it comes to environmentalism but as I have said before, we try and there is one L.A. characteristic that works in our favor whenever change is needed: we embrace the new. During the past few years drought tolerant and native plants have become en vogue for public spaces and private yards. They are replacing rose bushes, water thirsty annuals, and in some cases even lawns. This is what they look like in spring: 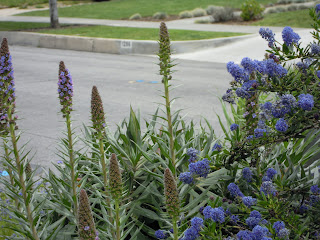 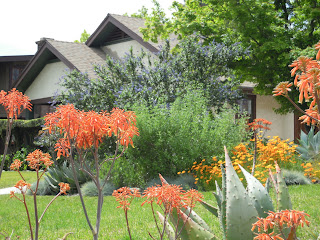 I love the pictures. Hardy, native plants always enhance a landscape more gracefully than something that requires too much unnatural care.

North Texas' drought is no where near as severe as yours - we even got a dribble of rain Tuesday, but I'd love to see some true spring rains here - our soil is thirsty.

In north central Texas, we get over 40" average annual rainfall: between 2" and 6" each month, May being the heaviest month.

Texas is covered with man-made lakes:
"It might surprise you, but, the state of Texas has more acres covered by water than Minnesota, the "Land of Lakes!" This fact is made even more astounding when you consider that all of our lakes in Texas are man made, with the exception of Caddo Lake which is partially in Texas, and partially in Louisiana."
http://texaslakesolutions.com/

We love our lakes.

But even with all the dammed up water, dense populations often must purchase their water from rural communities and pipe it in.

I've had a fear for years that Dallas will suffer a sustained drought, draining our lakes and we will all dry up and blow away in out prevailing southern winds. "Dallas is, on average, windier than the 'Windy City' of Chicago." - Metroplex Daily Dallas/Ft Worth.

That was probably a lot more than you wanted to know,

Christina Schweighofer said…
Wow. Thanks for the research. You get more than twice than rain of Los Angeles (15 inches per year), more precipitation than my hometown of Innsbruck in Austria (37.28 inches) which can be very wet in the summer.

I was in Dallas many years ago but can't remember the wind and I did not notice the lakes on a later trip through Texas either. Sounds beautiful. I must pay better attention next time!

August 14, 2011
Paper or plastic? Bag from South Africa. My friend recently came back from a trip to South Africa and brought me a reusable grocery bag. It is from Woolworths, one of the largest retail chains in South Africa; it is made by a community project and serves as a symbol of the company's commitment to sustainability and social development. I will think of this whenever I use my new bag. Thank you, dear friend! The Woolworths bag is not my first reusable bag. I carry two baggies which fold up into packs smaller than a deck of cards in my purse and a bunch of bigger ones in the trunk of my car. To me this feels like an easy way of making a difference environmentally. Others seem to have a harder time. When the county of Los Angeles recently introduced a ban on plastic bags for its unincorporated areas the new ordinance was met with resistance. Shops bemoan that paper is more expensive than plastic. They charge customers ten cents for every paper bag. Shoppers complain about the t
10 comments
Read more