A Palace, a Promise, and an Empty Canvas 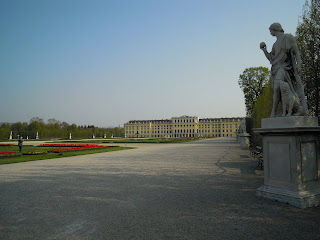 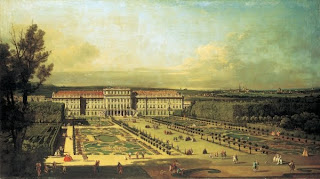 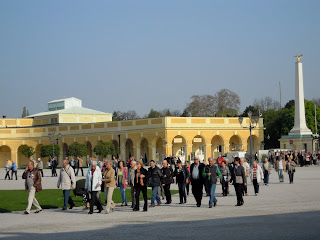 In the morning, before the crowds arrive, Vienna's Schönbrunn Palace and the park behind it belong to the early birds: ducks, chattering in Neptune's Fountain; slugs, slimy and rust colored, making their way across the empty paths; gardeners, plucking weeds, working silently with rakes and hoes. Serenity reigns. My early morning Schönbrunn is an empty canvas. In that sense it is like other morning destinations, not different from the places in L.A. where I used to run off the night and enjoy the promise of a new day. For all I know it is not even different from Canaletto's early morning Schönbrunn 250 years ago. (In the image shown Canaletto depicts the gardens as busy, but by the look of the shadows he was painting in the afternoon.)

The first buses arrive before nine a.m., earlier in the summer. Tourists swarm out by the dozens. From their guides they hear about Empress Maria Theresa under whose reign Schönbrunn Palace as we know it was finished in the 18th century. They are told about the many Hapsburgs who lived here after her, learn that Schönbrunn has been on the UNESCO's World Cultural Heritage List since 1996. They draw their cameras. Click, click, click. The canvas fills.

I love this snapshot of the moment in time, beauty of the place poised as on a fulcrum between stillness and busy-ness.