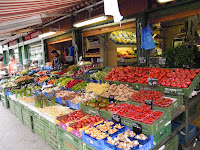 The Naschmarkt, a bazaar style market not far from the Opera, has been a favorite of mine since I first moved to Vienna in 1983. At the time the market was more "home grown" than it is now. Farmers came from the agricultural areas outside of Vienna to sell what was in season: asparagus and strawberries in May, cherries in June, cabbage and potatoes in the winter. The men had big working hands, and their wives wore peasant scarves, which they tied at the back of the head.

In those days, Vienna was a dull, grey place, inhabited by old, grumpy people. The Iron Curtain was only an hour's drive away. It seemed to weigh on the Viennese, depress them. In the 1990s, after Communism in Europe and with the expansion of the European Union, things began to change. Vienna opened up. When we moved back here two years ago, after an absence of twelve years, I was amazed: the town was younger, more international and vibrant than I could have imagined. 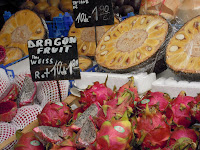 The Naschmarkt has changed too. There are more restaurants and fewer grocery stalls than there used be. But for a few at the far end of the market, the local farmers have stopped coming. Importers of international fare have replaced them. They come from the Southern edge of Europe, mainly from Turkey, sell cheese made from sheep's milk, olives, filo pastry desserts. They market their products with free bites: Turkish delight, falafel, stuffed baby peppers. It is mainly the men who sell. They joke and laugh, offer friendly words to potential customers. Tourists roam the bazaar's alleys, sample a nut here, a date there, take pictures, and smile. Vienna's hip and in crowd meets in the bars and restaurants, but serious grocery shopping is done at less pricey locations now. 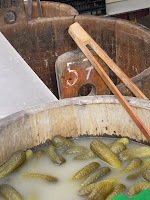 One of the hold-outs of the old, temperamentally less Southern Naschmarkt is the pickle guy, a tall, lean fellow with tubs full of pickles swimming in salt brine. The pickle guy wears a dark coat during the cold season, a white shirt in summer. I cannot remember a Naschmarkt without him. The pickle guy does not smile and he does not like photographers. In fact he is known to stick out his tongue at the cameras. Does it matter? No. There is no doubt that the elimination of borders across Europe has changed Vienna for the better. But Vienna needs its old grumpiness too. For what would it be without it? What would it be without the Viennese?