October 17, 2010
The other day I passed by a new Subway sandwich place which had opened a few blocks from our house. As I was reflecting its green and yellow sign images of foot long chunks of white bread came to mind, mayo smeared on one half, mustard on the other; ham, provolone, pickles, jalapenos, onions, peppers, olives, tomatoes in between and a bag of chips for sides... People in America like to pile on.

I also thought of my favorite fast food place in Vienna, which goes by the unspeakable name of Trzesniewski. The original Trzesniewski opened in the first district more than one hundred years ago. Its oldest location is tucked into a narrow street off of Graben. Other outlets are scattered around town.

Trzesniewski sells open face sandwiches, slivers of rye bread (white or wheat? no, you do not get to choose!), topped with spreads made from either egg or tomatoes or cucumber, pickle, salmon, herring...  The more elaborate creations come with two or three spreads, applied next to each other, striped flag style, or with a slice of egg for decoration. Very simple. Very tasty. 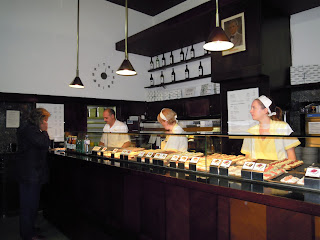 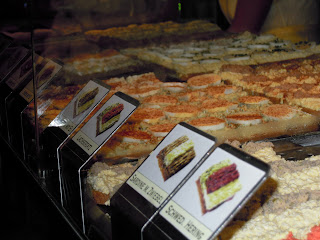 Lorraine Seal said…
You remind me of the time we had two teenaged girls from Northern Ireland, part of a cross-community friendship programme, as guests for several weeks in our home in California. The sandwiches we ordered in a San Francisco restaurant arrived just as Americans like them -- piled high with meat and cheese, lettuce and tomato slices.

To my surprise, the girls recoiled. They were used to sandwiches with one or two thin slices of meat, perhaps with 'salad' consisting of a limp piece of lettuce. Until then, I hadn't considered the different cultural interpretations of the simple sandwich.

However, the open-faced sandwiches you describe at Trzesniewski sound delicious. We'll have to try them when we're next in Vienna.
October 22, 2010 at 3:31 AM

Love the "limp" in the lettuce! Thank you for your comment.

I ate my first piled high sandwich in March 1996 in Florida. My now husband, M., and I had started dating six months before and were touring the US together.

Our last stop took us to Fort Myers, Florida, to visit friends of M.'s. They prepared a build your own sandwich meal for us at their home. The sight of the choices of meat, cheese, vegetables, and condimets overwhelmed me, but M. offered to make my sandwich. I have never eaten a better one.
October 23, 2010 at 8:08 AM

Badger said…
It bis a bit hard to reconcile Subway with Trzesniewski. But I guess it is quantity vs quality, I love Trzesniewski.
October 26, 2010 at 10:43 AM

Quantity vs. quality? Maybe. But another factor is at play here, a cultural difference: Americans live abundantly, Europeans traditionally do not. More in one of my next posts.
October 26, 2010 at 10:05 PM

Anonymous said…
thanks for the pics - i was there over seven years ago and I hope that I can pay them another visit and that they haven't changed - i was at one that wasn't brand new near demel pastry house and hung out there drinking a tiny beer and enjoying some tasty sandwiches... loved it.
January 1, 2011 at 7:33 PM

The people at Trzesniewski actually claim that they invented the tiny beer (it is called Pfiff; engl.: whistle). Not sure whether this is true but I used to love it.
January 2, 2011 at 6:44 PM