August 16, 2010
What a treat: we got to spend a few days in Madrid, an elegant yet careless, old fashioned and easy going, proud but welcoming, southern place with French, Austrian, and Arabic influences. The people were friendly, and the pickpockets we had been warned of by tourists from Austria must have been on vacation.

We met friends of relative F.'s, an international bunch of happy, energizing people in their thirties, talked politics and culture, ate simple food: Spanish omelet made with firm, waxy potatoes; goat cheese, Iberian ham, green olives, served with plain white bread, country fare, tapas. The yellow peaches were so rich in taste and so juicy that our preteen daughter exclaimed, "I have been waiting to eat this all my life. It is like in James and the Giant Peach."

In three days of wandering we noticed more colorful shoes on feet and in shop windows than I have seen in decades; we studied architecture in all styles from Madrid Baroque to Art Nouveau, Art Deco, and Fifties Modern, found two Renaissance paintings that were on loan from The Huntington in San Marino, California, for an exhibition at the Thyssen Museum, hung out at one of the neighborhood food markets, where we thought of L.A.'s Grand Central Market and of Mexico which has stayed true to its Spanish roots in so many ways.

The churches we had planned to look at were closed, but we knocked on one of the rectory doors and the priest let us in. He took the time to give us a tour of his church and dismissed us with a solemn God bless. I am placing the Spanish capital in my personal pantheon of European cities, along with London and Rome. 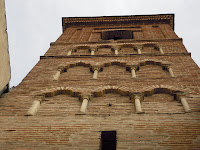 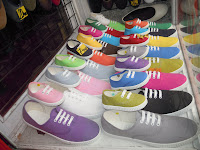 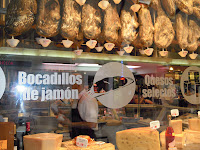 Lorraine Seal said…
We visited Spain for the first time last September, staying in a small Catalonia village for the wedding of one of our Dublin nephews to a young Spanish woman. It was astonishingly beautiful; it also reminded us very much of Southern California. (Which isn't surprising given that Southern California has a Mediterranean ecosystem, one of five in the world.)

While there we went to Tarragona and Barcelona but not Madrid. To my shame, I had never been inclined to visit Spain. Now that I’ve visited, I can’t wait to go back. I love the way you evoke the experience, not least of which is the subdued sun-washed palette enlivened with splashes of brilliant colour.
August 20, 2010 at 5:30 AM

Christina Schweighofer said…
Thank you, Badger and Lorraine. We are grateful to have seen so much of Europe while we were living in Vienna. Enjoy your travels!
August 24, 2010 at 8:44 AM